“Oh, and there’s a persimmon tree too”, the realtor mentioned to Louise Briggs when they purchased their home. The Briggs had no idea when they moved to Bloomington in 2011, that a backyard tree would take them on an adventure that is still unfolding.

Coming from the Boston area, knowing nothing about persimmon, Louise researched how to identify which of her trees was the persimmon – learning that persimmon bark has a ’tiled’ appearance. Out into the snow she went, finding just that type of bark on the biggest tree in the back yard – 65 feet tall. The tree appeared old and dreary to her, enough that she worried it would need to be removed. Soon after, the snow melted to reveal thick carpet of persimmon seeds underneath.

The Briggs meticulously cleaned up all the seeds and twigs in the spring, planning to create a comfortable lawn area for themselves and their dog. They had no idea what was in store for them as the summer settled in. Fruit and more fruit grew, dropped and decayed, killing the grass around the tree. And they kept falling. Louise began collecting the fruit into 10 gallon bins, a daily chore. She hosted parties where friends would help process the fruit into pulp. Still they kept falling. Summer turned to Autumn. She was up to 400 pounds and still they kept falling.

A Better Way To Harvest

For their second year, they purchased two 20’x40′ nets, linked them in the center and drove stilts into the ground for support. The fruit began falling gently into the netting for collection. They simply pushed the small piles together, and opened the hole in the net to collect the fruit.

Today, Louise still holds her Perpetual Persimmon Pulping Parties, where everyone leaves with fresh pulped fruit from the kitchen food mill. She has also found a local company that purchases fruit by the pound, but they it only take so much. So her call still goes out for those interested in purchasing the fruit. Inquiries come through the private Facebook Group, The Persimmon Cartel.

This is no Ordinary Persimmon Tree

The biggest threat to the tree is a weakness where the co-dominant stems emerge from the trunk. There is a significant pocket of decay in that branch union. This weak spot had been remedied previously using a static brace – a strap tied around the two branches to keep the fork from splitting. These older static braces end up pinching into the bark and constricting normal flow of water and nutrients.

As a thank you to Louise, and the community that has emerged around this super-producing tree, we offered to replace the old bracing at no cost. New dynamic cabling systems solve the problems of the old straps: anti-friction sleeves eliminate abrasion, shock absorbers allow for free movement, a loop in the cable allows for tree growth without girdling, and inserts rest around the limb broadening the support.

Master climber Simon Normile made it look easy, installing the dynamic cable 2/3 of the way up from where the stems fork, removing the old brace, and completing some needed pruning.

Additionally we pulled back the mulch that was covering the root flare, and spread organic tree mulch at a depth of 3-4 inches out to the drip line. 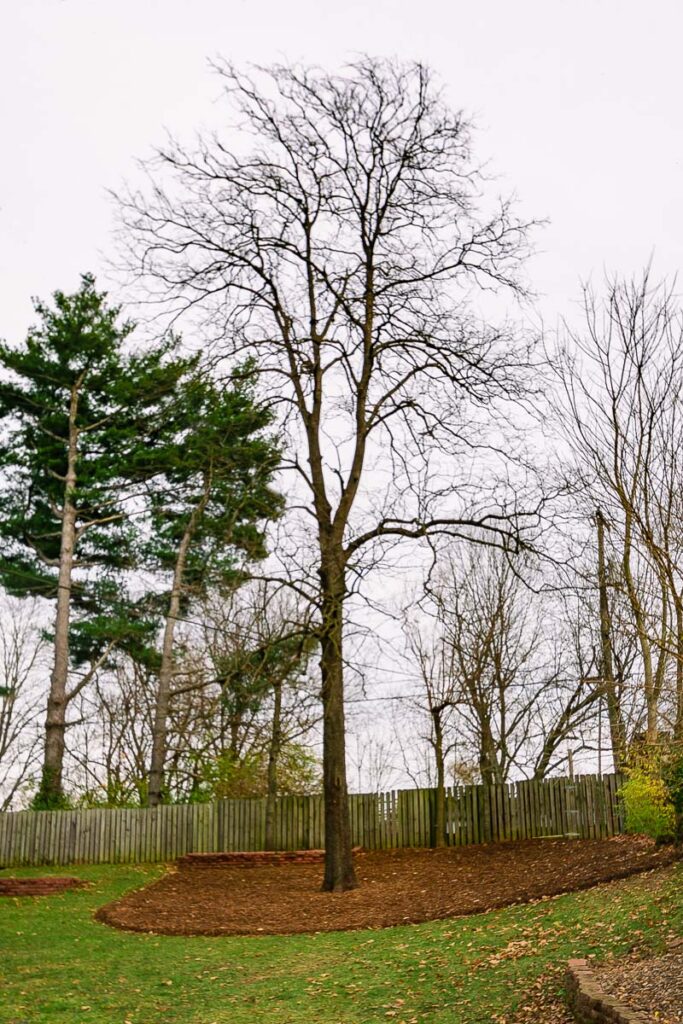 Louis Briggs interview on Earth Eats, The Persimmons Are Falling!